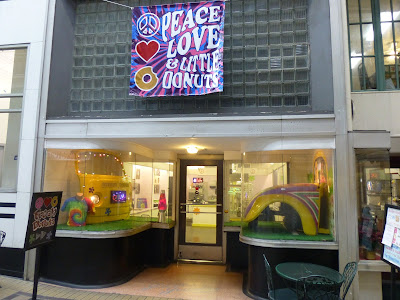 My donut journey has multiple purposes but a major one is to name a new supreme leader in my personal list of donut shops.  Now I got it!  It happened only 2 days before the journey was complete but it was well worth the wait.  In downtown Nashville there is The Arcade,  a little mini market/alley in between one city block with a few different shops along the way.  Here lies Peace, Love, & Little Donuts, the greatest donut shop I've ever had the privilege to enjoy. 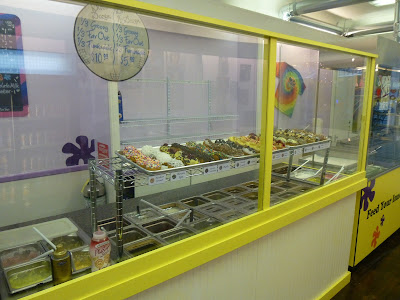 The is a franchise location of the original which is in Pittsburgh, PA.  There's just a few locations: Pittsburgh, Nashville, Cleveland, Naples and I hope they continue to be a small franchise and don't expand too quickly but put a lot of thought into each city they open.  Nashville is a great spot because it isn't just a Country Music mecca, Rock & Roll and Blues are huge contributors to the music culture there also. 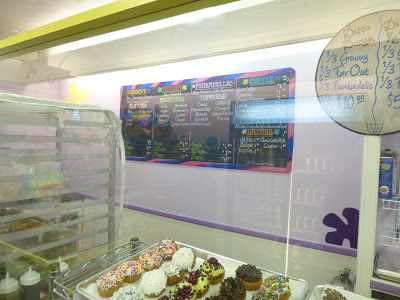 I'm not even a fan of "hippie" culture.  I've always found the whole image and lifestyle not very interesting and passed over plenty of it.  There's some music from that era I enjoy listening to and that's about the extent of it.  So I was a little worried that I would find this place tacky and uninteresting.  I was way wrong!  They do such a good job of it here mixing donuts with the fun aspects of life. 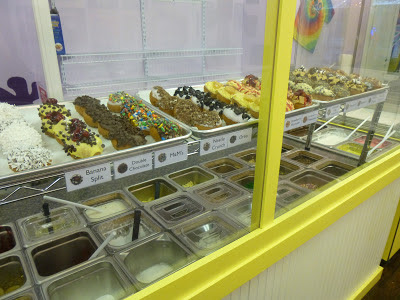 The Little Donuts part of the name comes into play with the actual size of the donuts created.  These are not large donuts, they are the perfect size if you want a quick indulgence and both the size and varieties are very similar to Dixie Donuts in Richmond.

The theme continues with the donuts.  There are 3 categories and price levels for donuts: "Groovy" - the cheapest buy with more traditional sugar toppings.  "Far Out" - one of the more frosted donuts with icing are a little more expensive.  And "Funkadelic" - the top level with all sorts of great combination toppings like a Bacon Maple Donut which I only didn't try because of the others I've had on the trip.  Still, it had pieces of bacon around the circle which looked like it would be great like Gibson's was the day before. 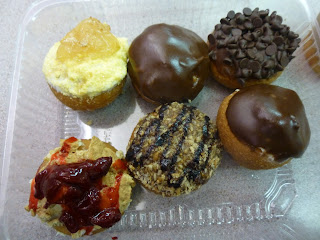 The selection my Mom and I sampled were from the picture above top left going clockwise, Apple Pie, Boston Creme, Double Chocolate, Strawberry Cheesecake, Samoa, and another Boston Creme.  The Apple Pie was amazing b/c the white frosting made it taste like Apple Pie a la mode.  The Boston Cremes had a little cream in the center AND more cream underneath the chocolate frosting on top.  The Samoa tasted just like the cookie only 3 times better than any cookie I've had.  All donuts were top notch.  The couple donuts saved for later that day lost just a little bit of freshness in the dough.  I wonder if there is just one little component that could make these taste just like they did in the shop.  Or maybe everything tastes better there because it's such a fun experience. 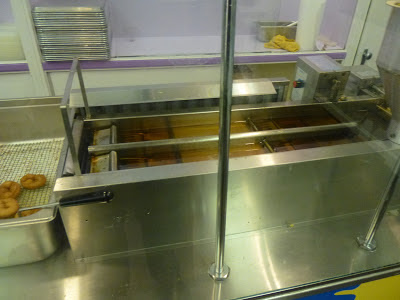 They even make the donuts right out in the open!  I didn't get a good picture of it but the fryer is right out front with some baskets for the donuts and some cooling racks.  Then if you need a donut that is not readily available, they can dress it up for you right on the spot!  So they have another great aspect to the process going on there too.

Another perk is the great coffee!  They have this french press coffee machine that takes a few seconds longer but is way worth it.  It's the perfect donut shop coffee solution.  They don't brew lame regular coffee.  They don't mess around with multiple jugs of pre-made coffee of exotic flavors or varieties sitting around for you to choose from.  They just make one kind of coffee and they do it very well.  I'd go in there just for the coffee. 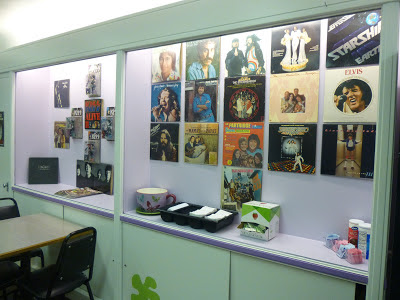 Adding to the vibe are the albums on the wall, which is not all "psychedelic" music but plenty of historical music pieces and even some KISS figurines displayed.  There was 60s and 70s music playing over the shop and they can even pump the smell of donuts out into The Arcade outside.

I might just have to open my own Peace, Love, & Little Donuts!!!

Quick Score - 10 - This place has the total package between amazing donuts, amazing coffee, and a great environment to eat your breakfast or midday treat.  I can't imagine how great a mood I'd be in if I lived in this city and got here all the time.
Donut Quality - 10 - Unbelievably delicious donuts.
Donut Selection - 10 - Great combinations that will appeal to any donut lover.
Donut Freshness - 9 - These are super fresh daily made but somehow a little of the allure is lost hours later.  Perhaps something could make this component even greater.
Service - 10 - Even the service was great.
Extras - 10 - There's few donut shops that play music in them or create such a fun atmosphere.  The coffee is amazing.
Appeal - 10 - Highly appealing
Emotion - 10 - I was blown away with surprise and satisfaction after my visit.
Other's Rating - 10 - 5/5 stars average rating on Yelp
Price - 5 - 3 tiered pricing system does well to match up with the types of donuts offered.
Donut Dunkability - 5 - These are very dunkable b/c they're not too big.  No donut holes were around that I saw but the Pittsburgh location advertises cake donut holes of mixed varieties so I will go with the explanation that I missed them or the Nashville location just hasn't implemented them yet.
Total - 99