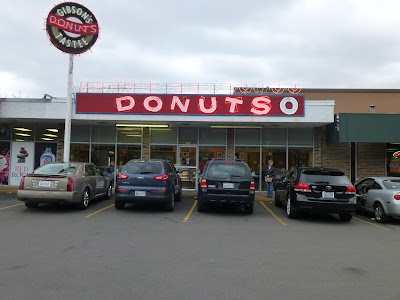 Gibson's Donuts has been serving Memphis since 1967 and it has all the feel of a donut institution.  It was hopping on a Tuesday mid-morning between folks coming in to grab and go and people just hanging out conversing over donuts and coffee in the large seating area. I was super impressed with one particular plaque on the wall presented to Gibson's by the Memphis Fire Department in Dec 2011, "In Appreciation of the Support and Encouragement Gibson's Donuts has Shown Through the Years to the Members of the Memphis Fire Department."  Talk about a great sign to see in a donut shop! 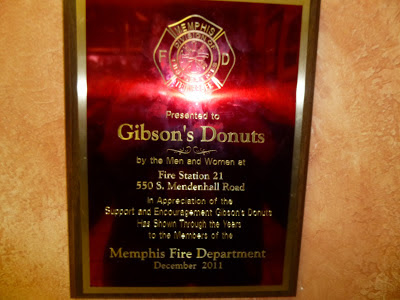 The donut counter is long and full of a diverse donut collection and there are several people working here between the counter and the kitchen and they are all helping each other and the customers out.  The big prize here was the Bacon Maple Glazed Donut.  It was the best bacon donut I've ever had and I feel the main reason it was better than Rebel Donut is the sprinkled bacon pieces instead of one large piece of bacon that becomes tough and a little flavorless.  Gibson's aren't like bacon bits, it's like whole bacon just cut up into pieces and I felt that maintained the great salty, meaty flavor and was the perfect quantity to accompany the sweetness of the donut. 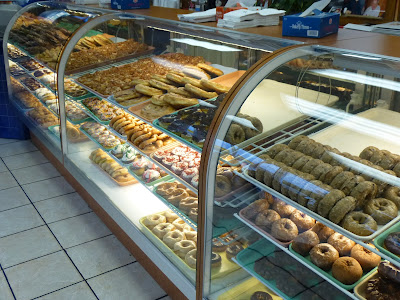 Donut holes were satisfactory, maybe a little too over sweet for me but Mom had a chocolate donut that was delicious.  Coffee was decent and there's such a great mix of fancy flavors like Red Velvet and Oreo cookie interspersed with the traditional donut varieties.  They even have Gibson's swag!  Coffee Mugs, T-shirts, and other odds and ends.  Not too many donut shops can pull that off.  But you get the impression Gibson's is the place to go and foster your donut love in Memphis. 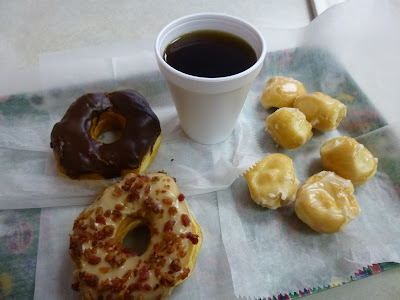 Quick Score - 10 - It's obviously an institution.  You get that feel the moment you walk through the door, if not before, as you witness the people traffic inside and out.  The city of Memphis comes through with a great donut shop!
Donut Quality - 9 - My own personal taste and appreciation for West Coast donuts make these too sweet for me but when I mixed the savory bacon component in here I'm good.  The chocolate was top notch.Donut Selection - 10 - Huge selection of donuts.Donut Freshness - 10 - Extraordinary fresh tasting.Service - 10 - Numerous employees, helpful, quick at their craft.Extras - 10 - An extra doesn't have to be non-donut menu items.  Extras can be the plaque awarded by the fire department, the merchandise component, the great seating area, and the great people.  This place has all that.Appeal - 10 - High appeal factor b/c of all those factors contribute to a place you want to go back to.Emotion - 9 - It was a near-perfect donut experience.  Other's Rating - 10 - It's a near perfect overall average rating on other food review sites but the fire department pushes it up to a 10.Price - 5 - The town has low prices and the donuts reflect this cost of living as they are low priced.Donut Dunkability - 5 - Donut holes availableTotal - 98