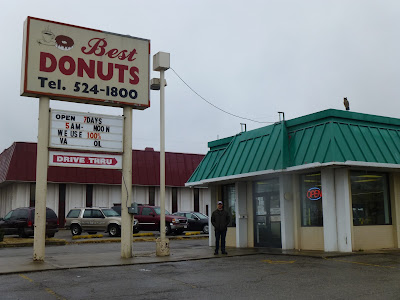 Oklahoma City, here I am!  After a morning snow shower, a donut was just what the doctor ordered.  I liked the owl on the roof of the building and it appeared to be a converted fast food building with use of the drive thru.  Nadine and I set out to sample the goods and grab Pat a cake donut since he was off to work and we were going to be the experts on this locale. 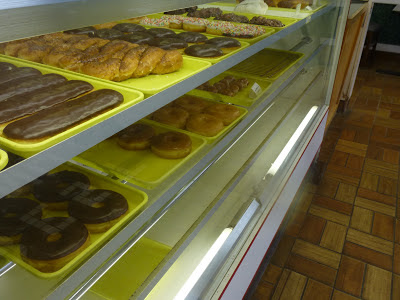 The only major issue was there was a very small selection compared to what I'm used to.  I can understand if things get going earlier here since they close early.  It still seemed like a shallow selection.  One thing that increases the variation is the ability to get different flavor cream fillings injected into many of the donuts.  I missed taking a picture of it but right behind the counter was a station with multiple nozzles attached to the creams so they could be pumped right in.  This is a great idea to mix things up.  Why do donuts usually have to be finished behind the curtain?  Only Holey Cream has dressed donuts up in front of me.  At least this place has that option. 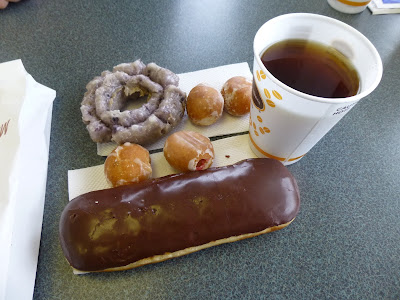 The injector really comes in handy with the donut holes because they have different jelly flavors inside them.  There's raspberry and grape and the potential is limitless.  I could really go for a rhubarb-strawberry donut hole.  I had a chocolate bar with great light dough but I didn't really go for the chocolate flavor.  For me, it felt a little on the bland side, maybe a little too light on the chocolate side for me.

Nadine made a better choice with the blueberry buttermilk. I spotted that one out right away since I had a great one yesterday at Benjamin's.  This one also had a great blueberry flavor, maybe not as perfect a glaze as I had yesterday but it was still a great, close second.
Best Donuts
2320 NW 23rd Street
Oklahoma City, OK

Quick Score - 6 - Light selection with so-so donuts for me, saving points were donut holes and fillings.
Donut Quality - 7 - Decent quality, no "wow" factor on actual overall donuts, just the parts like the jelly.Donut Selection - 5 - It didn't feel like the donut case could hold many donuts even if it was first thing in the morning, a smaller selection than I've seen usually.Donut Freshness - 9 - I believe these were of very fresh variety.Service - 9 - Great help with questions and info, service was very good.Extras - 7 - Energy drinks!  A few other extras here and there.Appeal - 6 - Lost some appeal for the old fast food locale.Emotion - 9 - This was great b/c I had a big spread to sample.Other's Rating - 9 - 4.5/5 average rating on Yelp and Nadine made a great pick with the blueberry!Price - 5 - Great traditional affordable donut pricing.Donut Dunkability - 6 - Extra point b/c of the jelly filled donut holes.Total - 78