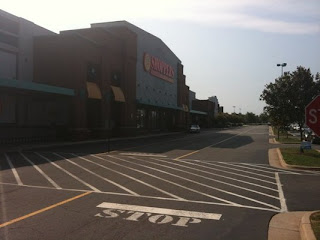 This is something different for my first Virginia donut experience since the move back, but I gotta explore every option available.  I'm unsure I'll find such a great and easy donut supply outside San Diego, so I'm going to search everywhere for my donut fix.  I went to Shoppers on a tip and it was especially inviting because I could stick it to Dunkin Donuts who reside in the same shopping center.  There's Dunkin all over the place and it's not that I have it out for them, it's that I really don't need to spend my time there.  Donuts are one of those treats that deserve the independent bakery.  There's no need for cookie cutting the same donut recipe for hundreds or thousands of stores. 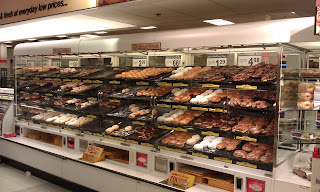 Not that Shoppers is the pinnacle of indie donut creationism.  It's a discount supermarket with a few locations around but with a much more impressive bakery than your usual grocery store.  They do have another thing going for them - all the donuts are Colossal!  And this is not a situation where they make small, medium, and really large donuts.  They are all Colossal sized.  From the Glazed to an M&M topped to a Boston Creme, they are all gigantic. 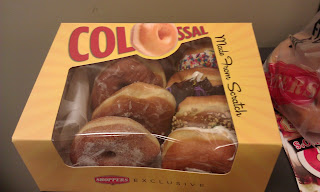 It's an all self serve operation where you pick and pack into bags or boxes.  Cheap!  You can get a Colossal donut for 66 cents and the special pastries like the Apple Fritters are only a little bit more.  Donuts by the dozen average out even less than 50 cents each.  It is an amazing deal for how much you can end up spending on donuts these days.  The quality and freshness are decent.  The dense nature of the dough is a little more than I prefer.  But it does have a nice buttery quality to it.  The Apple Fritter had good glaze and apple flavor but it did have little pieces of apple in it that were borderline charred.  I actually thought it was a Chocolate Apple Fritter with chocolate chips in it only to realize those were bits of apple.  The glaze may have been a little more uneven than you see at many donut shops, but once you put it all in context, it fits.  An interesting donut experience! 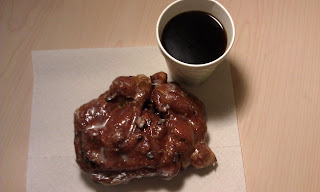 Quick Score - 8 - Okay donut quality but impressive portion size.Donut Quality - 7 - So-SoDonut Selection - 8 - Impressive selection for a supermarket and interesting candy topped donuts.Donut Freshness - 6 - Some day olds probably mixed into the self serve case, hit or miss.Service - 6 - Not really applicable here but early in the morning it's only self check out and you can't do that with a box of donuts so you gotta get an attendant to help.  Extras - 6 - The bakery extras like cookies and muffins look promising.  They've got a walk-in beer fridge area that's pretty good.Appeal - 6 - The Colossal donuts hold much of the appeal.  The store itself is not an appealing experience, other than the beer.Emotion - 7 - I was pleasantly surprised with the donuts.Other's Rating - 7 - Mixed reviews online, but I did have a personal recommendation that got me there!Price - 7 - Extra points for such great prices!Donut Dunkability - 3 - No donut holes available that I saw.  But doughyness of the pastries lends itself well to dunking.Total - 71
Posted by "Memphis Worley" aka Ben Nemceff at 3/26/2013 04:09:00 PM