The city of Brother Love had not yet been represented on DonutJourney and Beiler's Bakery was the perfect first entry for the world of Philadelphia donuts.  Just one of numerous food options inside the Reading Terminal, Beiler's cranks out many baked goods, of which the Donuts are truly impressive.  Reading Terminal is really hopping these days where you can satisfy any ethnic food craving you have on a particular visit.  It's all mixed in with some specialty stores to round out the perfect shopping and dining experience.

You will be blown away at the first sight of the Beiler's donut case.  Where Bismarcks shimmer off Crullers that mix with Cream Filled that play off Fritters that shine off Icing Topped Donuts.  There are easily over 30 flavors of donuts on just the regular menu, with a couple specials on the chalkboard to make the decision making process even tougher.  The case is such as beaming aura of goodness, it's truly impossible to capture in a photo.  Between the line here and the immense crowd milling throughout the terminal, you really can't back up and get an all-encompassing shot of this entire case.  But at least I got a good down the line shot and some closeups. 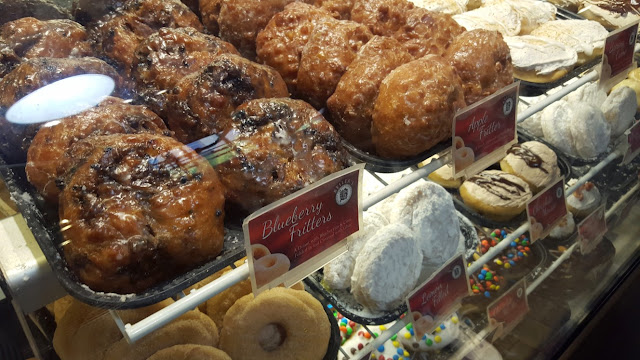 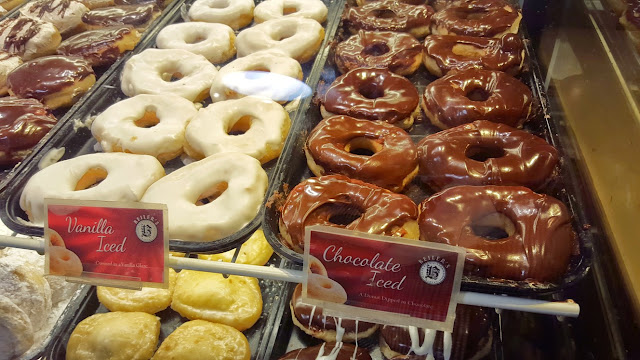 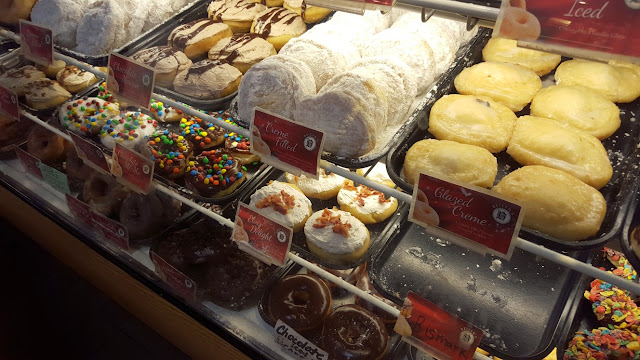 Besides the major beaming attraction of the donut case, the next visual feast is to take a few minutes and check out the donut making process over on the other side behind the counter.  The great part of the Reading Terminal is all the food stalls being like open kitchens you can see all your food cooked right in front of you.  At Beiler's you can see dough being laid out on the counter and cut (with amazing donut cutting rollers), you can see some floating in the fryer, you can watch toppings applied after cooling, you can watch buckets of cream used to fill donuts, and you can just salivate over a giant tray of apple fritters just waiting to go to the next step and be placed inside the display case. 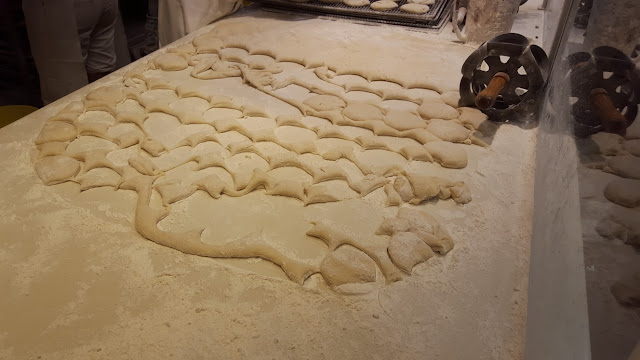 I got the opportunity to indulge with some fellow donut admirers so it was the chance to try pieces of 6 different kinds of donuts.   The choices made were Glazed, Chocolate Cake Glazed, Apple Fritter, Strawberry Filled, Oreo Cream, and Peanut Butter & Jelly. 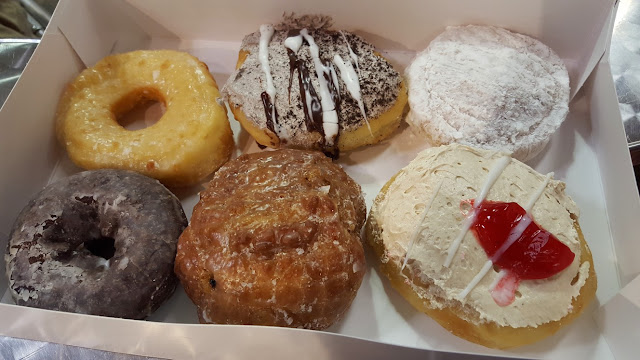 The Peanut Butter & Jelly was my personal favorite of the day.  This had the strawberry jelly dollop inside and on top and the peanut butter icing on top was so light and smooth it was the perfect combination.  This was a yeast donut that was also light and tasty making it a very easy donut to enjoy.  In fact, all the yeast donuts are easy to wolf down and the traditional glazed is perfect.

The cream fillings behind the counter looked amazing and it was anticipated the Strawberry Filled would contain a strawberry cream to test.  As it turned out, it was a strawberry "jelly' filled and a little redundant after the PB&J.  It was okay but just something to watch out for next time.

The Oreo was really awesome with that same light, whipped consistency of the Peanut Butter icing.  And the Apple Fitter was very tasty and a perfect easy-to-eat size, not ridiculously huge, it really fit in with their line of donuts.

I was a little disappointed in the Chocolate Cake Glazed.  It can be one of my favorite flavors and somehow this one just felt a little too dry to me.  It felt like the glaze was cracked already in a lot of places and maybe just needed to have more coating all over the donut.

But overall, this was an amazing experience.  I look at these pictures and think about what it would be like to live in Philly and get to come by here and get to try them all.  And now that I can see my photos at home, I just salivate over all the flavors that look so tasty.  I know for sure, no East Coast DonutJourney would ever be complete without another stop at Beiler's!

Beiler's makes more than just donuts, additional baked goods are also available at the Reading Terminal.  A great insight into the Beiler's legacy can be had over at @ Bon Appetit;  Generations of Baking Traditions at Beiler's Bakery in Reading Terminal Market

Quick Score - 9 out of 10 - The sights, the smells, and the huge flavor selection make this a great choice for the donut shop you choose in Philly.
Donut Quality - 8 out of 10 - For many donuts here a 10, but maybe some dilution on my end from the varieties I did not like as much.
Donut Selection - 10 out of 10 - This is by far the best selection I have seen it some time.
Donut Freshness - 10 out of 10 - Super fresh for sure.
Service - 10 out of 10- This is really very good because the line on a Saturday was long and constant and the employees were lightning fast.
Extras - 8 out of 10 - Coffee was decent but nothing to write home about.  A lot of the Extras could be considered the other baked goods at the other Beiler's counter there.
Appeal - 10 out of 10 - The Reading Market holds great appeal overall for all that is available there.  Beiler's just is another reason the place is so enticing.
Emotion - 10 out of 10 - It was an all-original experience going into the Reading Market on a Saturday, building up the excitement, and seeing that awesome case full of donut delights.
Other's Rating - 10 out of 10 - High ratings by others really helped me decide to come here.
Price - 6 out of 5 - Donuts are cheap!!!  I cannot stress that enough!!!  Extra point for price
Donut Dunkability - 4 out of 5 - I did not see any donut holes available and they could definitely exist and I just missed them, and I definitely had enough, but Pennsylvania Dutch Donut Holes definitely need to be pushed.

Another note is that Beiler's is listed in some places as closed on both Sundays & Mondays.  But they were definitely open on Monday during another visit to Reading Terminal Market.