The brick and mortar donut shop will always be my favorite, but mixing it up is a necessity so I have to jump into the arena of donut stands & trucks!

For the Washington DC metro area the Eastern Market in Capital Hill is a major weekend event.  It has everything from a traditional farmer's market to local arts for sale to a nice gathering of food stands pushing out hot delicious meals.   If you want some amazing shrimp 'n grits, Puddin' has an entry that you'll never forget when you want to re-imagine savory comfort food heaven.  And then to get your fill of a whimsical and delicious breakfast dessert perfection, stop by the Migues Magnificent Mini Donuts.  It is not by mistake it has been placed on "best of" donut lists of the city. 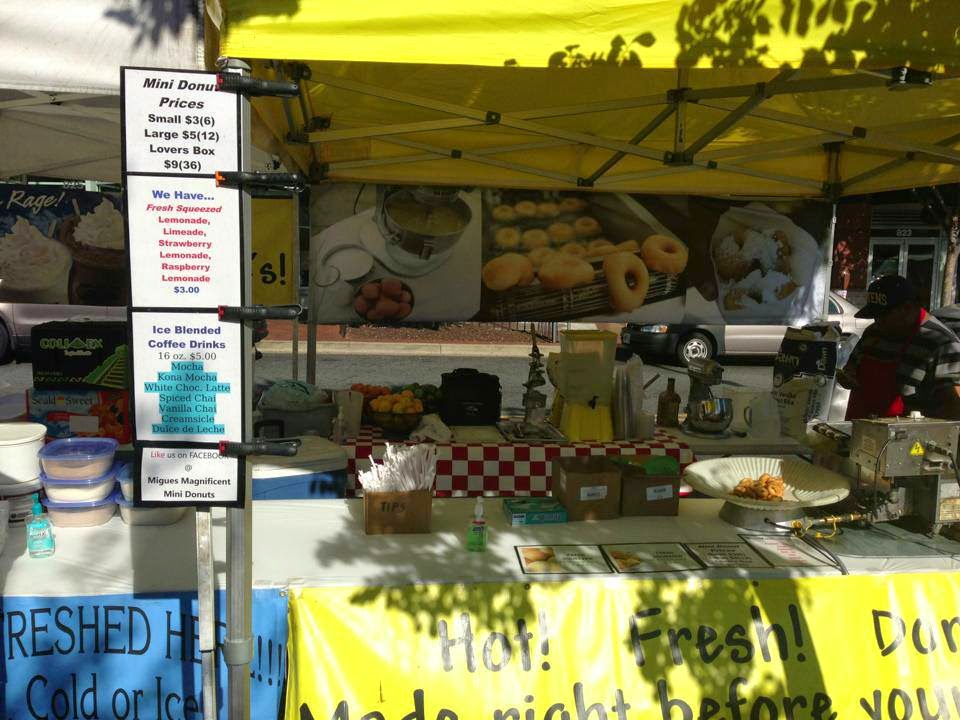 The major draw for me here is the Magnificent Mini Donuts being freshly made right in front of you on their super amazing industrial donut conveyor belt!  Just watching is a joy for all ages.  From the start the batter automatically sizes out portions to drop into the oil, it floats along its river of oil, the donuts get flipped automatically(!), and then climb on the belt out of the oil where it lingers on the precipice just briefly, before falling out and rolling onto the drying platform.

Once those minis are yours you get to move on over to the toppings bar and add to your heart's desire.  Now some places allow you to personalize your donut with toppings by giving you the power to make the choices but then immediately take that power away by having the donut shop employees do the actual work before giving you the creation.  They ration out your toppings and you can nicely press them for more, believe me, I've done the "how 'bout a little more chocolate on that...", but ultimately they are always in control of what you're going to consume. 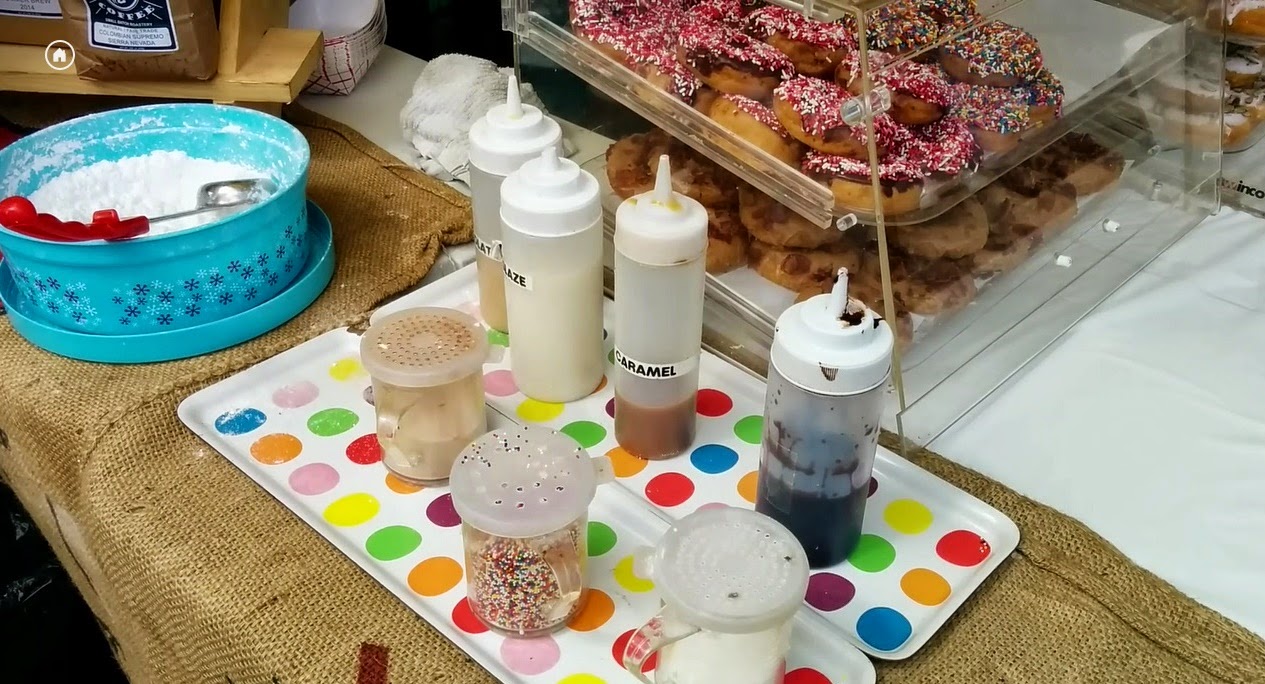 I got to be in complete control of my finished product at the Magnificent Mini donut stand.  There are choices of chocolate, caramel, or vanilla glaze sauces along with additions of granulated sugar, cinnamon, sprinkles, or powdered sugar.

I got to decide what I wanted, add it myself, and go as wild as my heart desired.  If I want to dump so much powdered sugar on top the donuts so the bag starts spilling it onto my pants when I sit down, that is my prerogative!  Maybe I want sugar there for a treat later when I'm ready for another sugar fix and I need it!  Maybe next time I'll pour all the glazes and toppings in the bag and then shake the whole thing up! 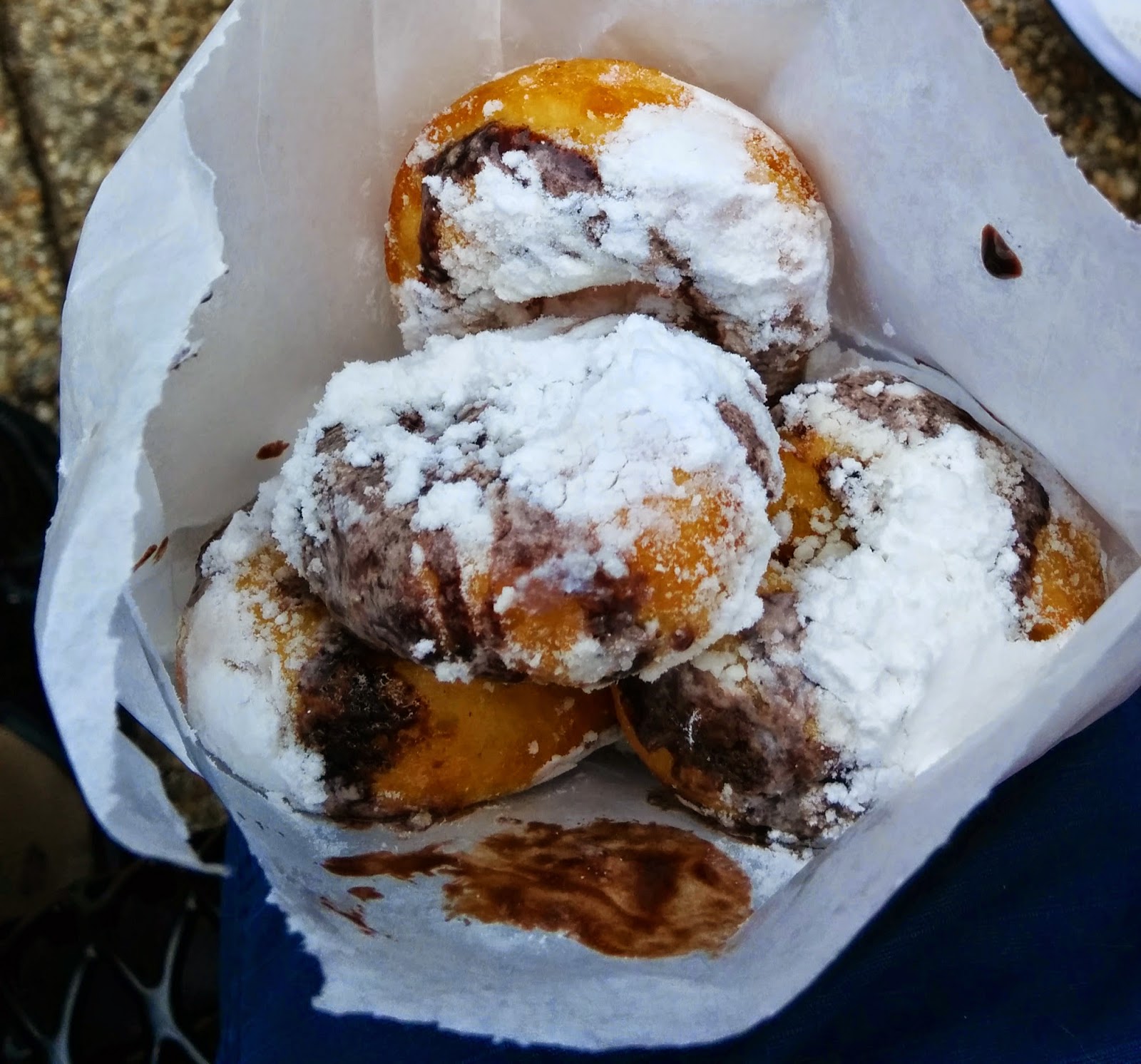 Now what you're getting when you bite into these creations is pure, hot off the press, mini donut heaven.  These little beauties are soft and scrumptious.  It's great how well some toppings stick, the cinnamon and sugar donuts were really perfect.  The chocolate and powdered sugar made for a very good combination that was a very satisfying donut experience. 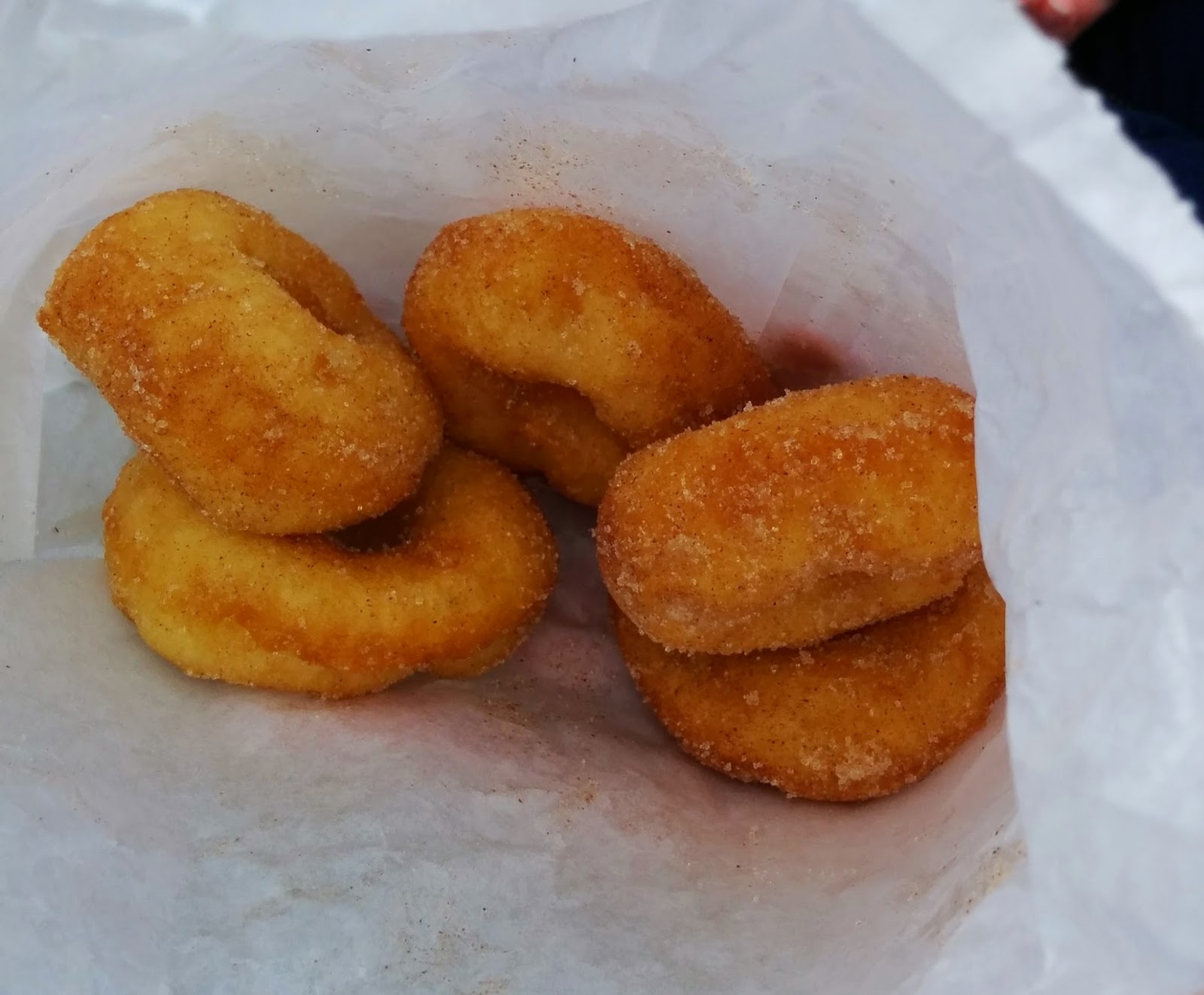 In addition to the minis, Migues makes some whole donuts and those are on display in the case.  I really wanted to try the "Blackout" donut with a dark chocolate donut, Oreo cookie crumbles, and white chocolate ganache.  All the more impressive was the fact no "Blackouts" were in the case, and when I quizzed the donut chefs, I was informed they were probably just a temporary thing.  But passing by later, they had appeared and I was able to buy one! 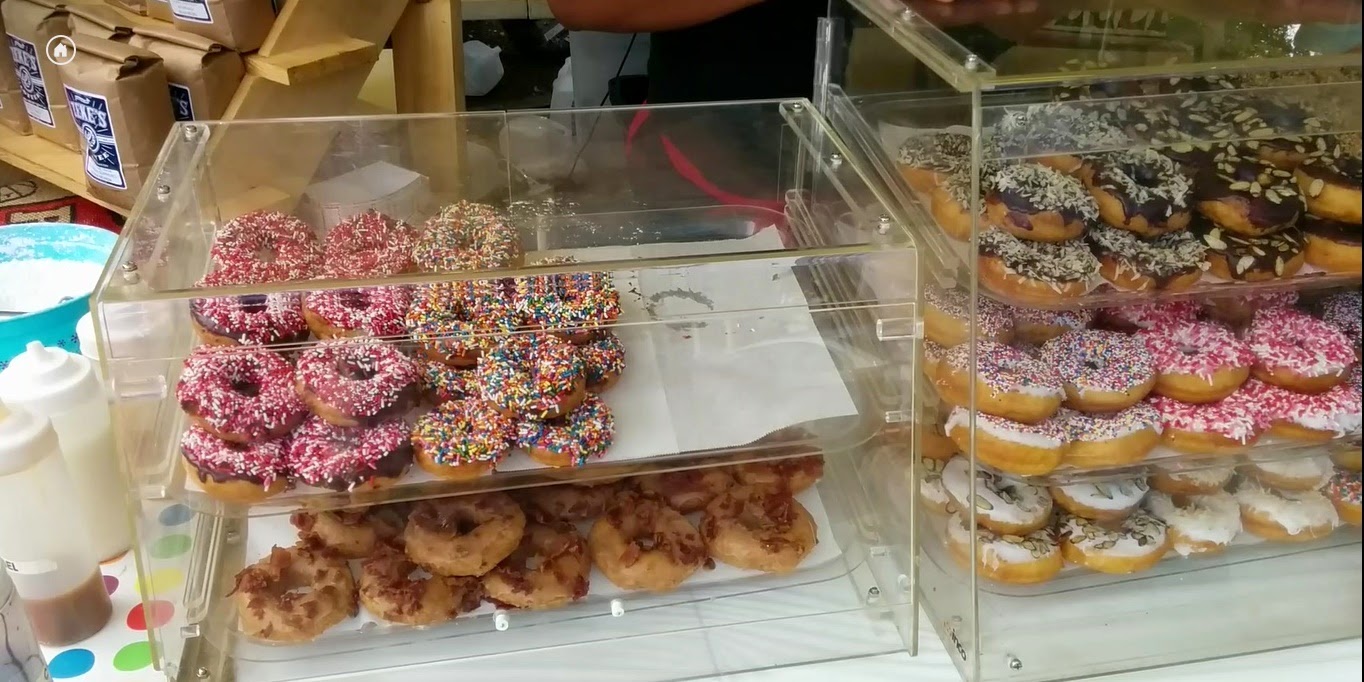 The only issue there was I couldn't eat it right away and the white chocolate ganache did some weird melting and smearing!  But it still tasted really good.  I think the white chocolate really puts it over the top, adding even more creamy chocolateness to the creation.  I bet this one would go really well with the excellent local coffee from Zeke's they offer. 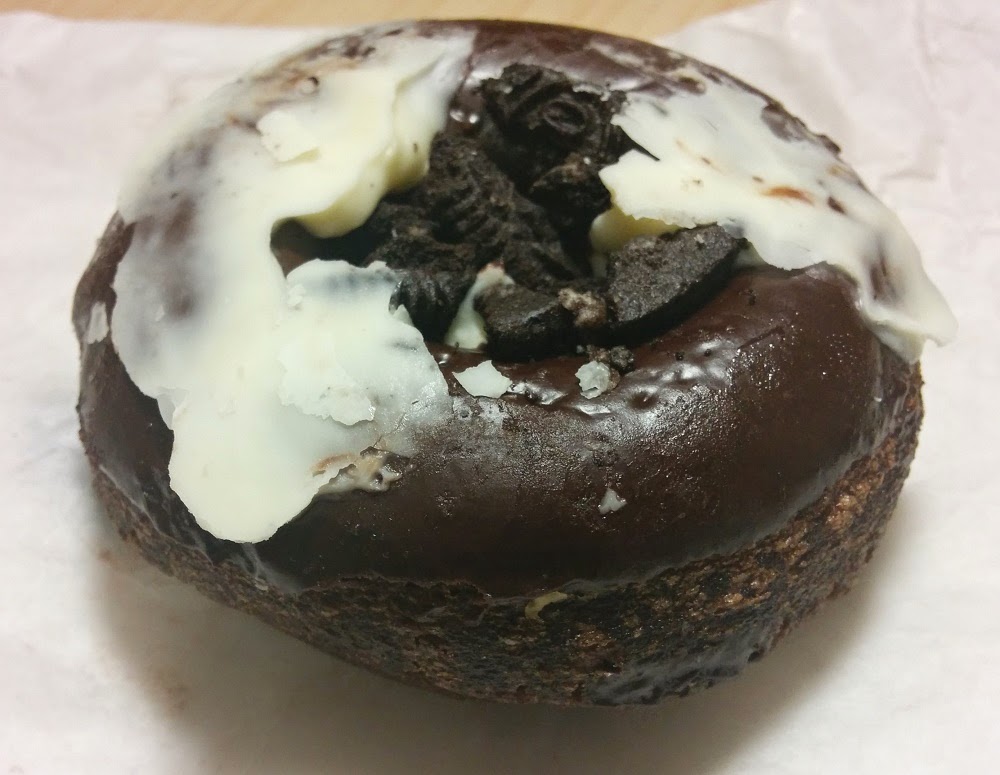 Since Migues is a totally different kind of donut experience, I'm not gong to run them through my traditional donut rating system.  I'm just going to give them an honorable mention as a great place to get some amazing donuts!  Go find them at one of the local DC markets and tell 'em Memphis sent ya!
Posted by "Memphis Worley" aka Ben Nemceff at 12/06/2014 11:39:00 AM