When does a donut become a donut?  This is the question I am asking myself as I prepare to eat The Zebra, a croissant-layered chocolate pastry, that is baked, not fried. Is it a donut the moment you create a round pastry with a hole in the middle?  Or is it only a donut when it comes out of the hot oil fried?  My instinct tells me it must be fried.  The outer donut shell must gain a little crispness.  It must fry the outside of the dough creating a cocoon for the inner dough to get warm and tender, to craft a unique consistency.  The hot oil has to transform that dough, bring out all the flavors  and enhance the product as frying magically does.

Then again, you can make "donuts" with the donut-maker at home that require no frying, just baking, so why not considered a baked donut the real thing?  You can have baked potato chips, instead of fried potato chips, and they are still potato chips, right?  They are just different, but if you stick with baked, eventually you will come to prefer the taste, right? 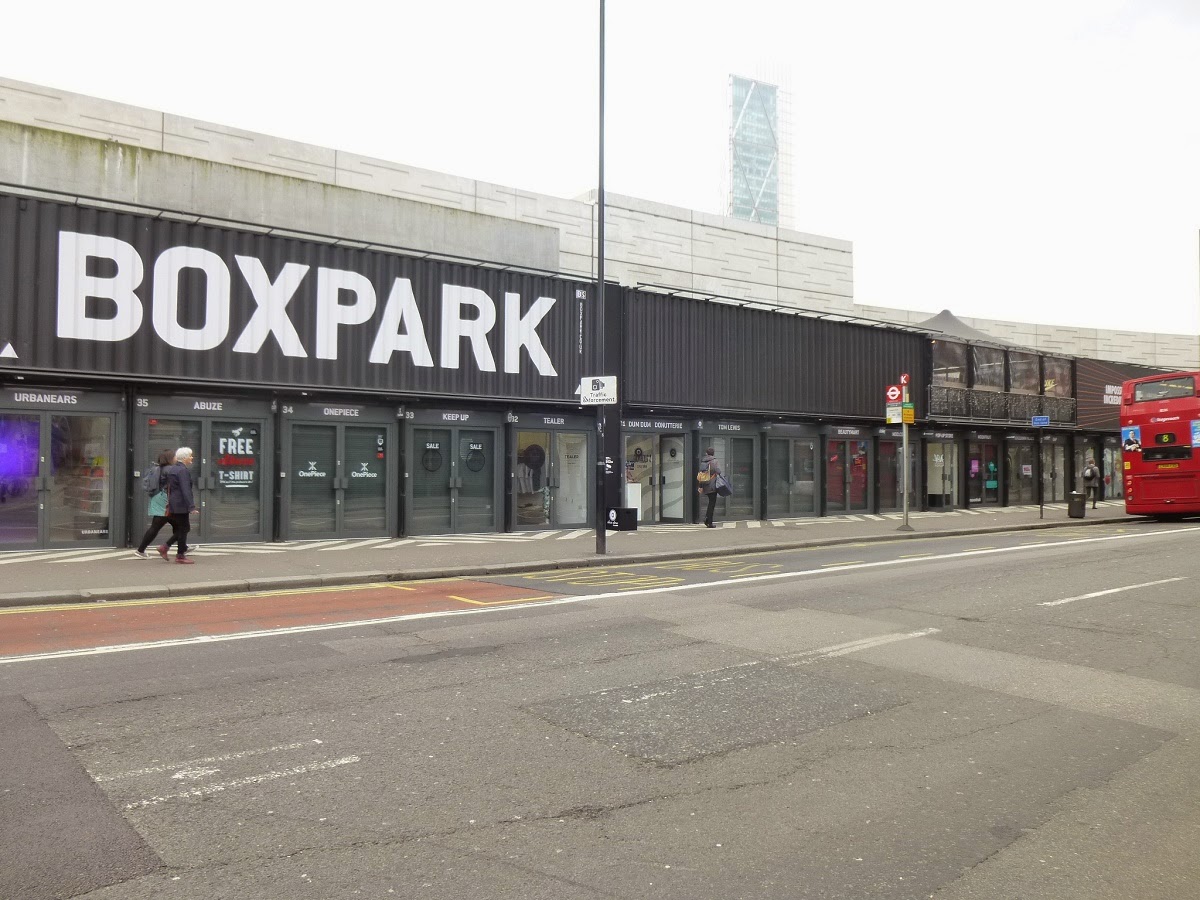 This experiment is what is being created at Dum Dum Donutterie located at the Shoreditch Box Park mall.  I had to go because I already heard of the storm it was bringing London.  Donuts almost a quarter the fat of a traditional American donut.  Not going as far as to actually call itself 'healthy', but a healthier alternative to the traditional type.  Donuts are baked, not fried, and they are simply sprayed with a little oil prior to baking.   I'm lucky enough to be in London only a few weeks after the Dum Dum has opened to sellouts at their first permanent location in the Box Park.  They had ingeniously generated huge buzz after a pop up location had done wonders. 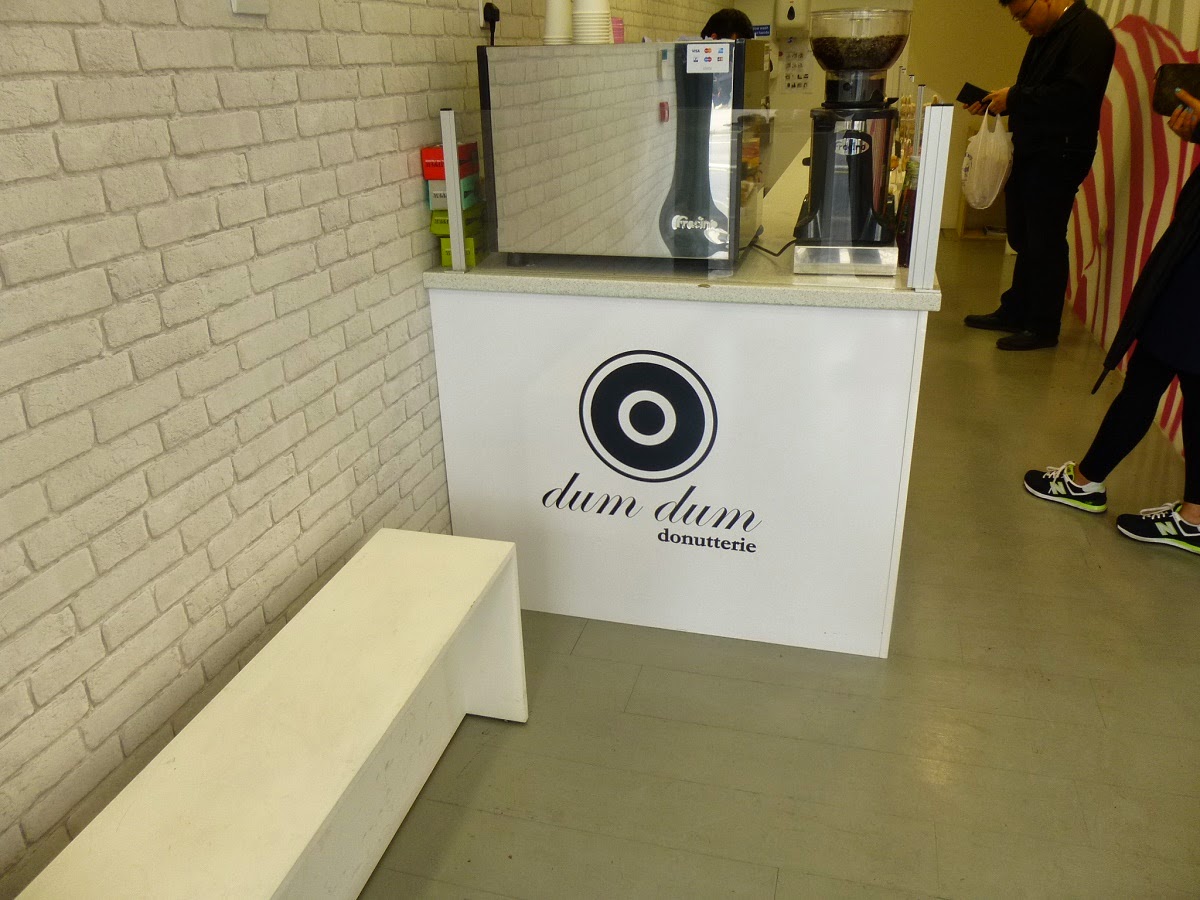 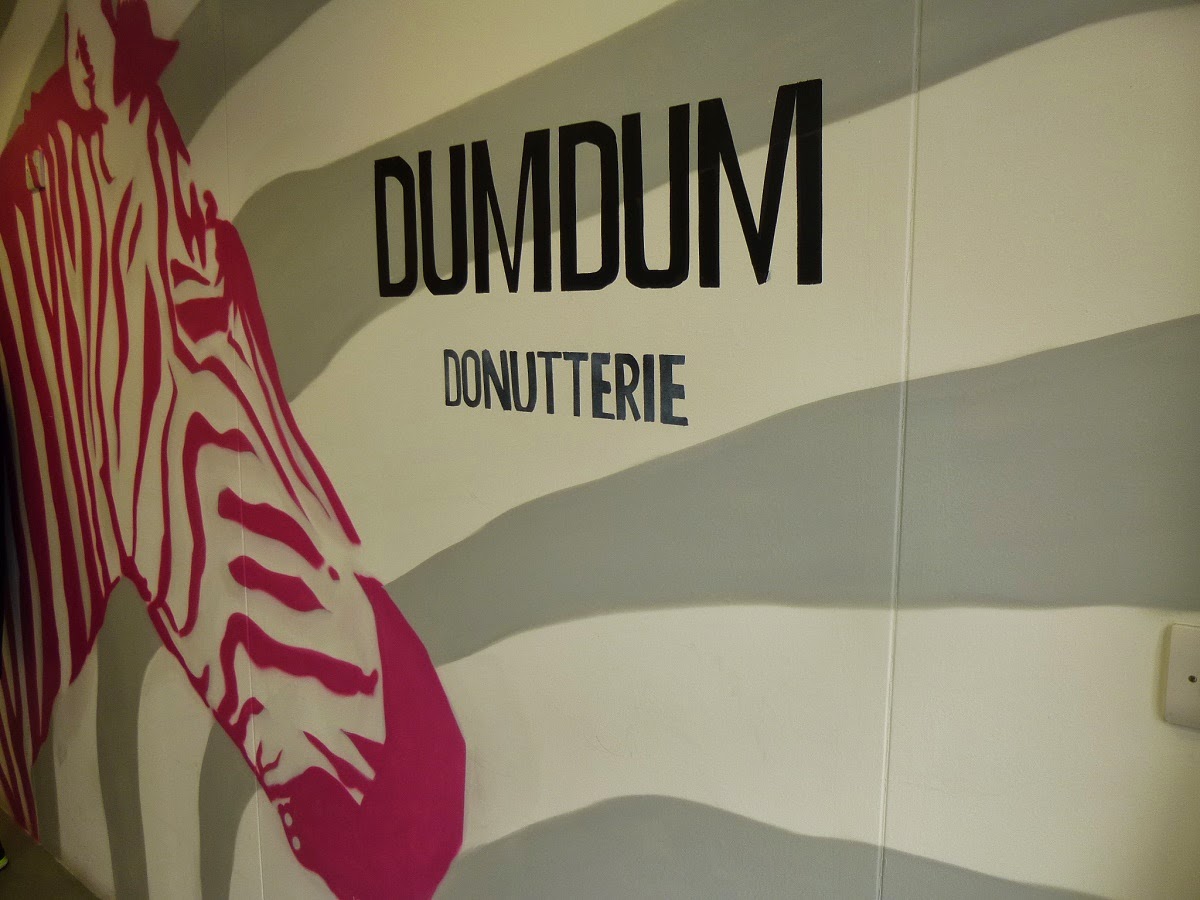 The Box Park is a great location for a donut shop.  I really have not seen the exact type of retail setting in America.  You have stalls, that can obviously be rented for periods of time, giving the proprieter themself the luxury of not having a huge overhead for a traditiona brick and mortar store.  You get these wild niche stores with different goods along with a great mix of restaurants where I saw tacos available at one place, falafel at another, and gryos at the next.  Not a straight up food court, but a smattering intermingled with shops, with a common outdoor picnic table on the second floor. 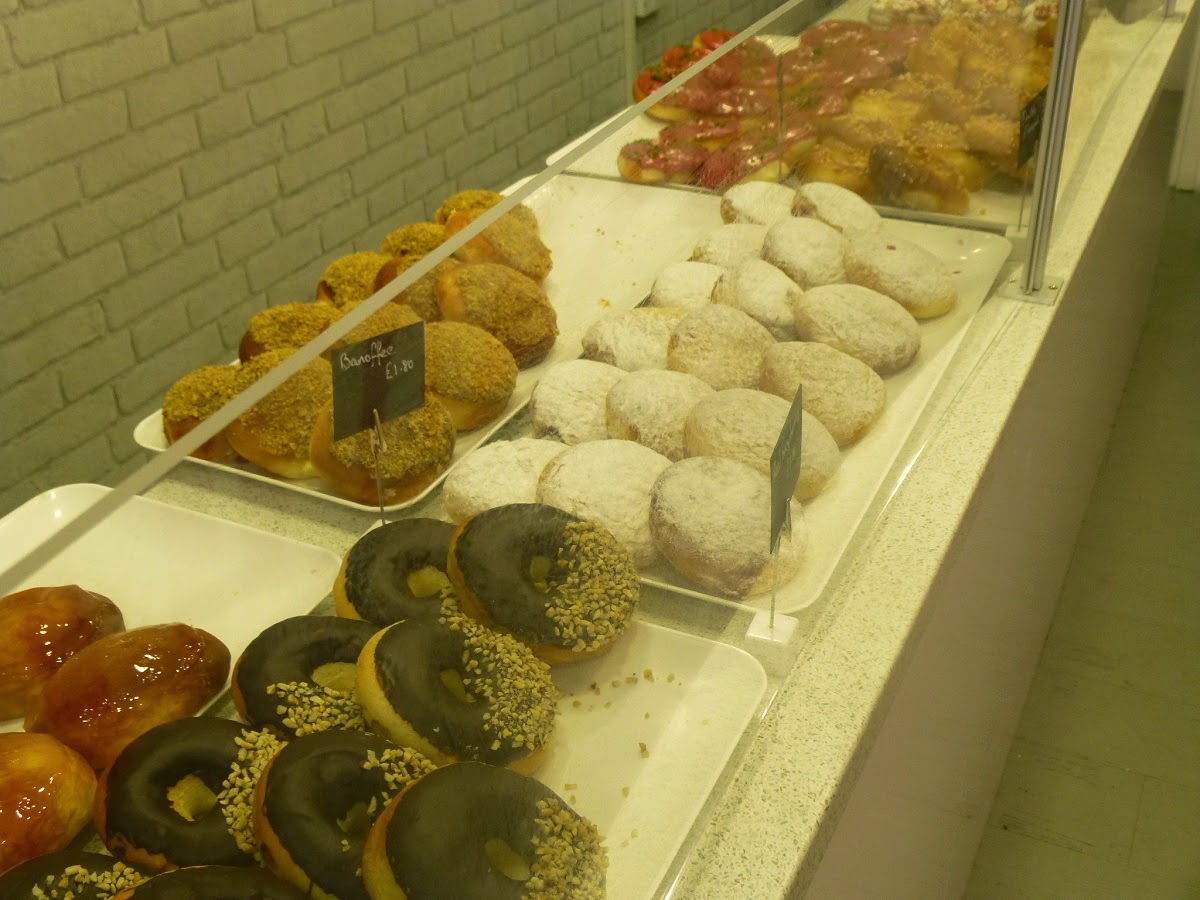 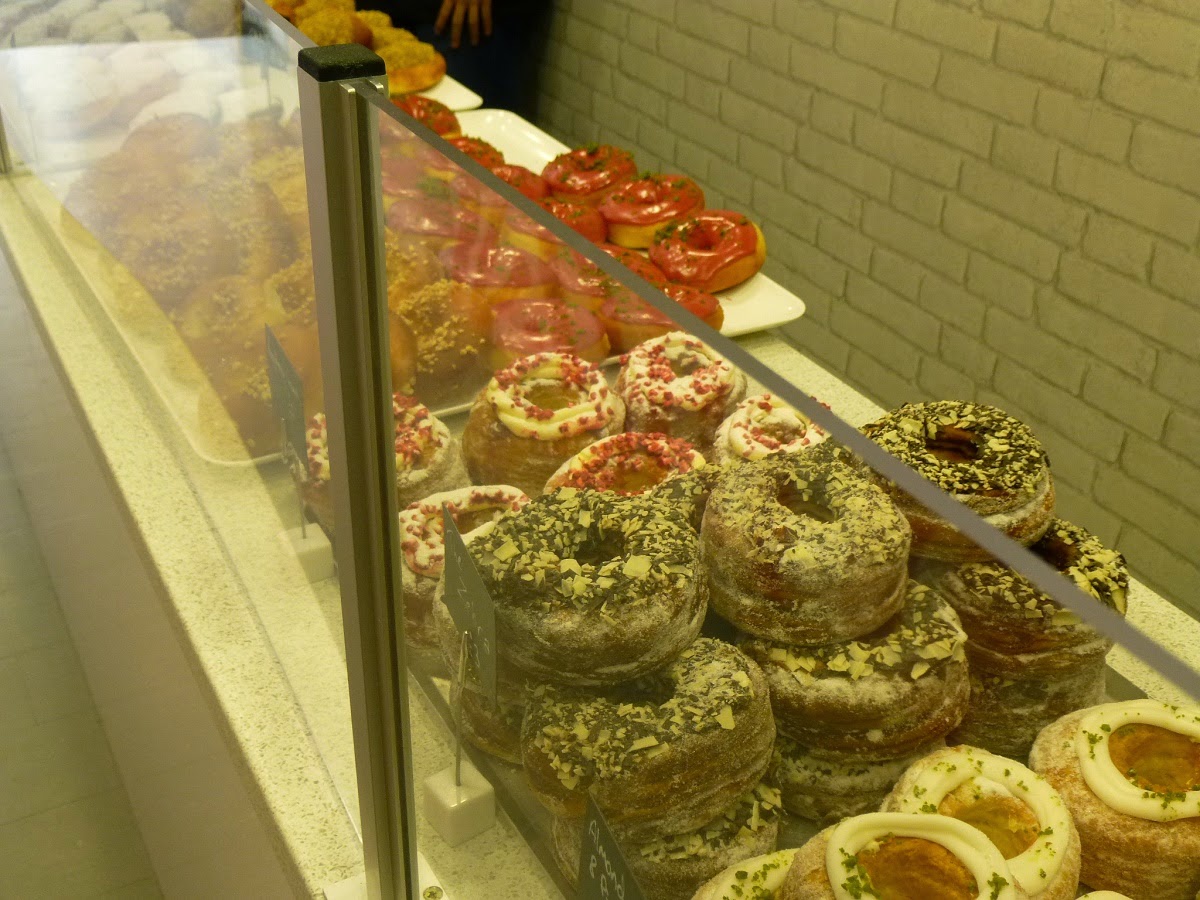 So the donut, did it taste good?  Yes, it had tasty layers of cake intertwined with chocolate cream, along with a dark chocolate topping.  But it tasted rather flat.  The insides just didn't burst into your mouth with the vivid tastes and flavor that I usually feel with a donut.  And there is truly no semblance of relation to the mighty Cronut.  I understand that is not the intention like other copycats do, but just the word croissant donut evokes that magical pastry from NYC, and apart from outside appearance, it has no similarity in actual flavor substance. 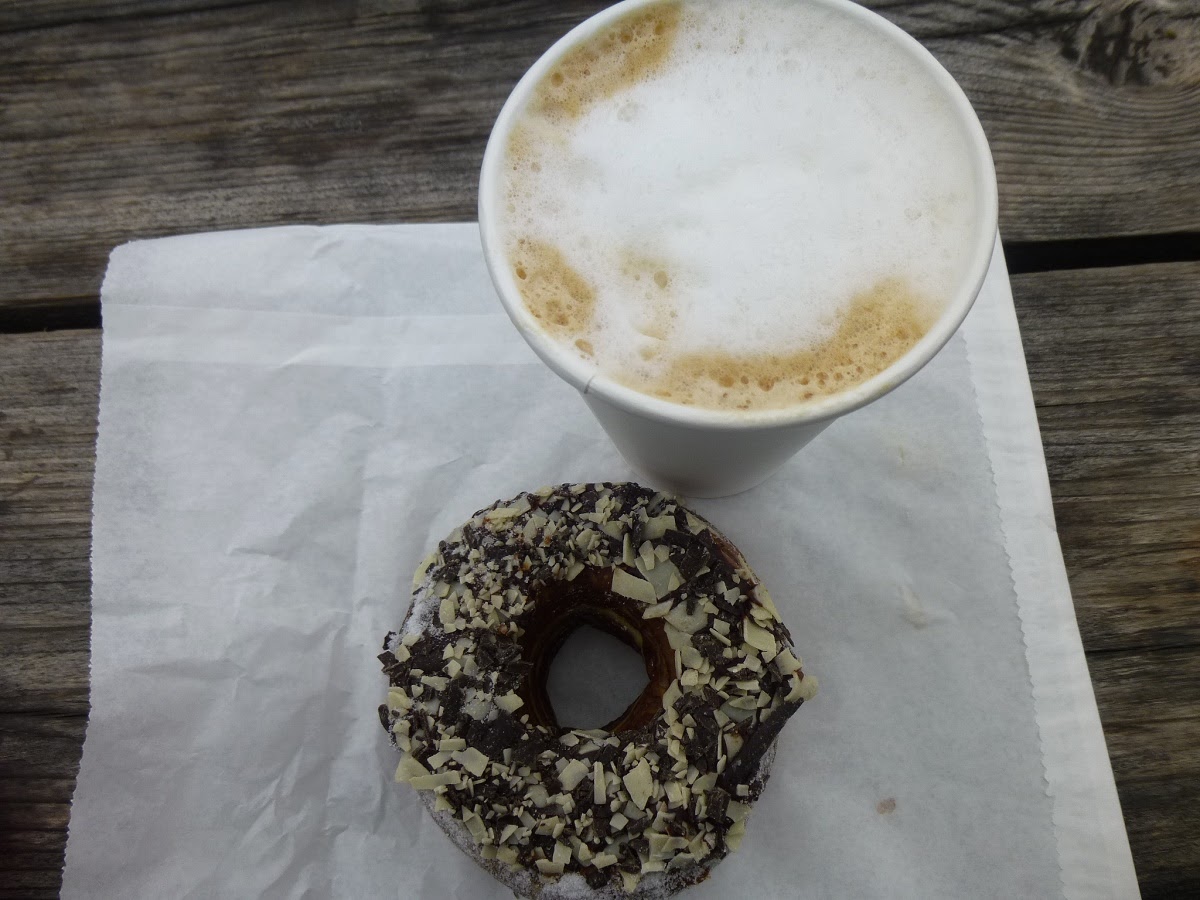 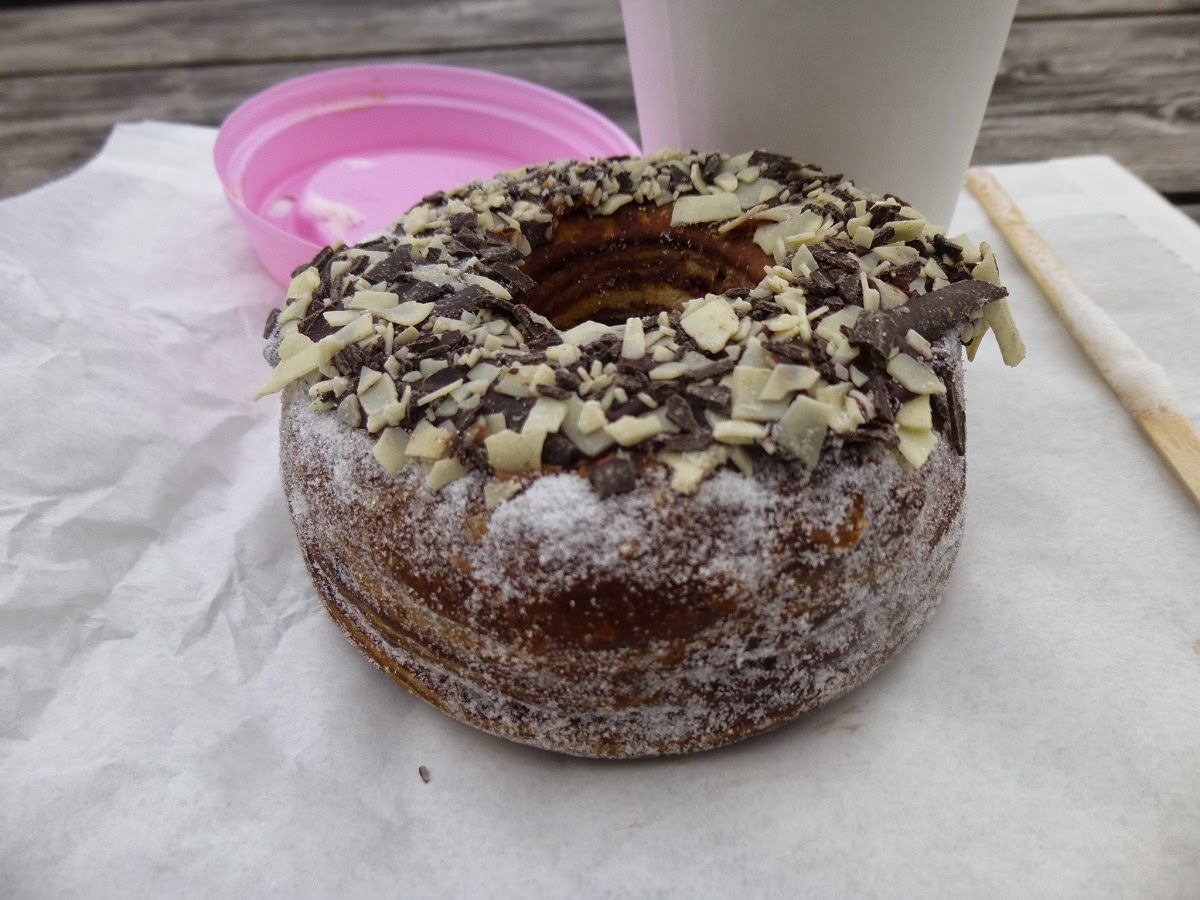 I went back the next day for a chocolate pistachio and I was much happier with this donut.  The chocolate was rich, the flavor of pistachio was just the right hint of nuttiness that balanced out everything.  And although the donut was a little flat and did not have the "lift" or fullness of a traditional yeast donut, the inside did resemble a traditional yeast donut in taste.  The flavors did come right through the dough and gave a great overall flavor. 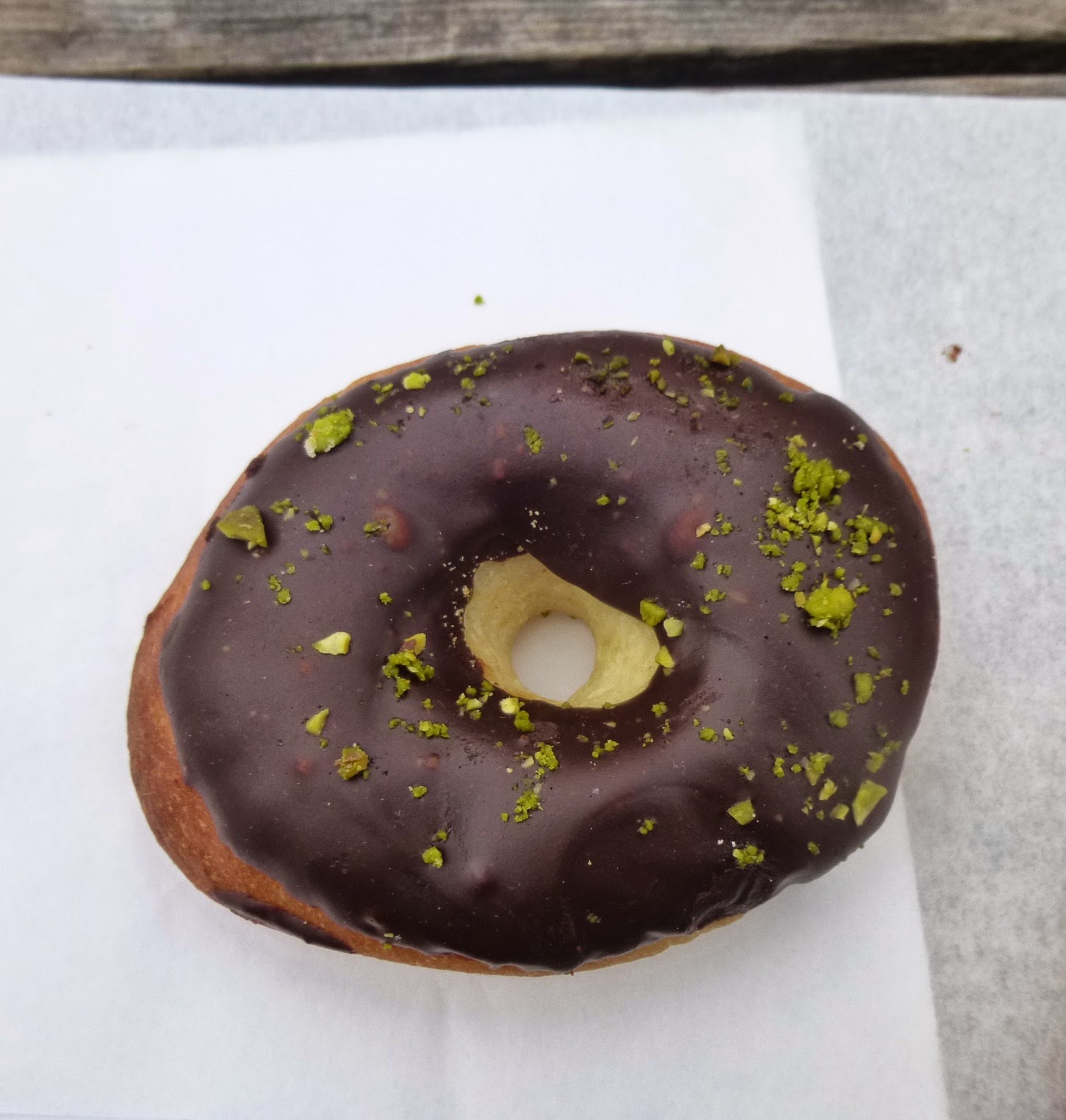 So where does this leave me in my donut conundrum?  It was the owner, Paul Hurley, in the shop when I visited and he said something along the line of "I enjoy all types of donuts, different kinds in different ways..."   There is room for all kinds of donuts to be created and consumed, and I'm glad someone out there is pushing the envelope. Just like the shops doing gluten-free.

It's just me.  I know I'm going to eat other types of fried food once in a while, I sure as hell am not sacrificing my fried donut in the name cutting back.  I'd rather eat healthy all week to enjoy just one traditional fried donut that one day, rather than being able to eat a donut like this two times a week.

Quick Score - 7 - A valiant effort at a more health conscious donut
Donut Quality - 6 - Mixed reaction from me on actual donuts themselves
Donut Selection - 7 - About 8 different varieties.  Not a huge selection but some daily specials mix things up.
Donut Freshness - 7 - Not a problem on freshness.  Donuts aren't baked onsite there but in the early morning hours at another location.  No chance of getting a hot donut here though
Service - 10 - Service was terrific and I did not have to see how they deal with the huge lines but they really seem to have it together and a good system for serving
Extras - 6 - The coffee is great and any other extras wouldn't really work and are not necessary.  The stall retail vision really seems to lend to just doing one thing right.  No seating is needed b/c there's tables on the next level above.
Appeal -10  - It's a very appealing adventure and the location is of great appeal
Emotion - 5 - A little dissapointing for me b/c of the hype I had read about.  When I actually bit into the first donut, it was a little flat and a letdown.
Other's Rating - 10 - I will give that a 10 based on the hype and strong reviews in London
Price - 4 - I'm sure it is competitive pricing for London
Donut Dunkability - 3 - No donut holes available, these styles of donuts did not lend themselves well with the coffee for me.
Total - 75