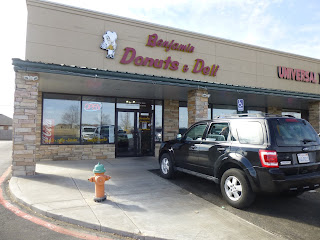 I had a serious decision to make about which donut shop to choose to visit in Amarillo and when I saw one called Benjamin's Donuts & Deli, I was totally there!  Great corner location in a shopping center with a large seating area, I had my first donut shop kolache/pig in a blanket!  So I had a hotdog and cheese added into my donut mix.  It was a little bit of a changeup and worked out great. 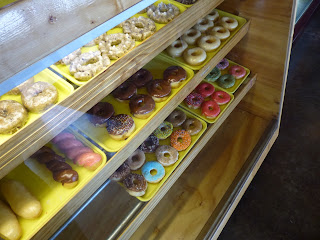 The blueberry buttermilk donut I had was sublime.  Not just a tease of blueberry like many other donuts of this flavor I've had.  This one was fully of blueberry goodness and really top notch.  I also tried the pina colada donut and donut holes with orange and lime icing.  They do frosted donut holes in several flavors and it's a recipe for success, another great variation on the traditional donut hole.  They really get original with some creations on the weekends so they have that talent to pull off both traditional and unique. 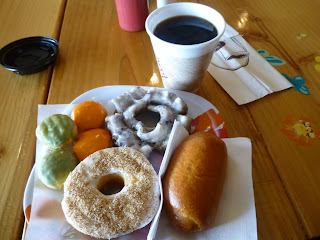 Benjamin's has 2 locations in Amarillo and closes after lunchtime so like many donut shops outside Southern California, it's not open all day or 24 hours so you really have to be on your game to get some.  They have sandwiches and even a salad bar so there are bonuses but the place shines on donuts alone.

I could have ended the donut journey early and stayed in Amarillo making donuts at Benjamin's!

Quick Score - 8 - Great donuts and venue to serve them.
Donut Quality - 8 - Pina colada was nothing special but blueberry was awesome.
Donut Selection - 8 - I'm sure it's huge on the weekends and smaller during the week, still pretty good while I was there.
Donut Freshness - 10 - Fresh baked goodness!
Service - 10 - Excellent.
Extras - 8 - The sandwiches and kolaches contribute to the other offerings.
Appeal - 10 - High appeal factor at the location on the 34th street location I visited.
Emotion - 9 - Felt really good after my breakfast spread!
Other's Rating - 9 - 4.5/5 average rating on Yelp.
Price - 5 - Great traditional affordable donut pricing.
Donut Dunkability - 6 - Extra point b/c of the multiple frosted donut hole options!
Total - 92